This is the first establishment in Catalonia and the first franchisee in Spain to incorporate the new Pans image. Pans & Company, flagship brand of the Eat Out restaurant group, has announced the opening of a new restaurant in Barcelona, ​​located in the Màgic Mall at Badalona. The new restaurant will be operated and franchised by businesswoman Mireia Cabeza.
The new Pans Màgic Badalona is also the first establishment in Catalonia and the first franchisee in Spain to incorporate Pans’ new image. Launched by the company a few months ago, the new image seeks to make the experience of visiting the restaurant warmer, more comfortable and to give it a welcoming atmosphere.
Thus, the new 177-square metre restaurant has a separate area called Pans Café, where, at any time of day, clients can enjoy the best coffee and hand-made pastries, prepared daily on the premises. Moreover, as a new feature, along with the traditional sandwiches that make up the brand’s main menu, the new Pans & Company will offer pizza slices that can be consumed on or off the premises.
In the words of Sergio Rivas, CEO of Eat Out: “Catalunya is one of Pans & Company’s key markets, and the new image of Pans has been very well received among our customers during these first weeks. We are very busy selecting new franchisees and business opportunities so we can meet our ambitious expansion plan for Spain, where we have plans to open 7 restaurants and remodel 10 others between now and the end of the year".
PANS & COMPANY
Pans & Company is the flagship brand of the EatOut Group. Created in 1991, the group leads the Spanish sandwich market and by 2014 had created a network of 192 restaurants –of which 132 are in our country– and sold over 20 million sandwiches a year. The chain is committed to a new dimension of quality in fast-food, based on the careful design of its restaurants, each of which has its own distinct personality, adapted to the most demanding consumer trends, and offering the highest quality in food, service, price and ambience.
Eat Out is one of the largest restaurant groups in Spain, with 11 brands of the calibre of Pans & Company, Ribs and Dehesa Santa Maria, and others such as ADK, FresCo, Pastafiore or Pollo Campero, besides being the country’s second largest Travel Food operator. The Eat Out Group owns over 400 restaurants that generated a turnover exceeding € 240 million in 2014, and served over 50 million customers throughout the year. A Group with over 25 years’ experience, that forms part of the Agrolimen multinational Holding. 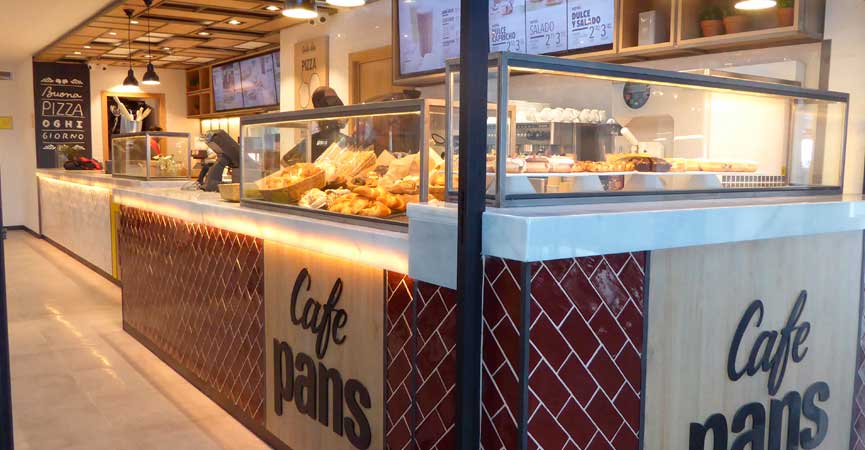